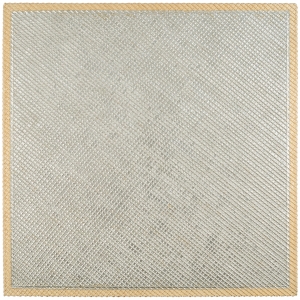 Robert Tiemann’s show is not exactly a breath of fresh air, but at least lyricism and simple sensuous pleasure are in evidence. Tieman’s work is at the moment geometric. He works with canted squares on which he lays dense string grids. Since the string is applied by hand, there is an insistent play between the intended geometry, the limitation of the human control, and the flexibility of the string itself. The result is soothing without being rigid.

More visual pleasure comes from the play of textures such as glossy, matte, sometimes reflective, as in his use of silver paint. The paint is carefully applied to that it rises and flows in relation to the grid. When the paint application is particularly successful, each tiny square is a unified abstraction.

In these recent paintings Tiemann successfully brings together two impulses: Abstract Expressionism and geometry. He clearly enjoys both rich, complex painterly effects and a strong geometric control that is never absolute, but pulls within the painting in an active way. He is currently picking up on an impulse seen in a series of works from 1974 called “Florentine Light” where he also used a strong geometric focus on a brushy, but subdued ground. At other times he has pursued what, from the perspective of his current work, seem like tangents as in his earlier “Birth of Venus” series. That group of ten paintings had truncated torsos and flashy colors that created an original, but not very substantial impact. His new work is more coherent and strong.

Where Tiemann will take his current direction is the real question. He has a lot of company in geometric grids and Abstract Expressionism, but his abrupt changes in the past speak of an explorer rather than an artist content to be safe.